Javi and Néstor visited Greece to join the teps-erasmus meeting in Aegina on the first week of April. 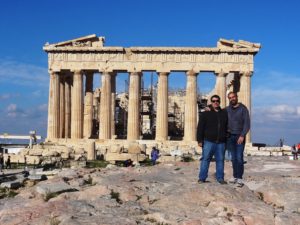 We arrived to Aegina and met our colleages from Erasmus+ on Sunday the 31st of March.

On Monday we went to Kypseli’s school. Greek teachers and children welcomed us and we could see different groups working on different boxes in their classes. We had a meeting about the week goals and talked about different possibilities to use the boxes in our schools. 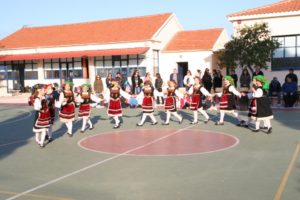 After that, in the afternoon we had the opportunity to visit a local artist pottery lab.

Next day we went to Kipsely’s school again and watched a school play about the myth of Aegina. Then we had a project meeting, where new boxes were presented by The Netherlands, Czech Republic, Estonia and Spain. Later we discussed about the surveys that students using the boxes filled out in each country. After that we visited the ancient temple of Aphaia. 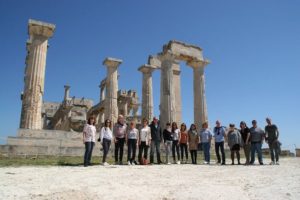 On Wednesday we had a wonderful trip to Agistri, a small island near Aegina. There we visited a Primary School, Kypseli school teachers presented them a health and nutrition program and new boxes. Eva from the Czech Republic showed some students how to use Ozobot robots. After that we had a wonderful tour by boat around the island. 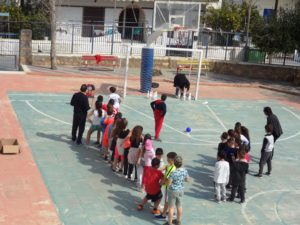 On Thursday we visited the bizantine settlement of Palaia Chora. Later we went to another satellite school in Vathi, there teachers from Greece, Spain, Czech Republic and Netherlands presented some boxes to the students. Then we had the final meeting to sum up our week and reach conclusions.

Finally on Friday we all went back home.

To conclude we would like to thank our Greek hosts for the amazing experience, organisation and kindness.